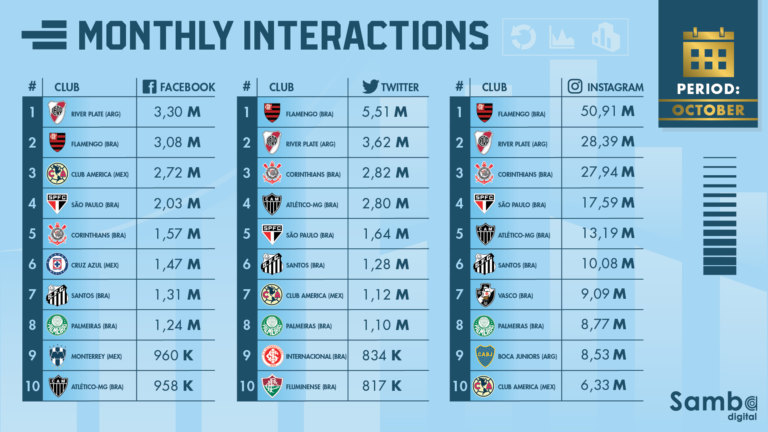 This month’s look at the performance of our LATAM club rankings on the key social media platforms: Facebook, Twitter, and Instagram revealed a few surprises. October brought fantastic news, as the Spooky month exceeded September by 13 million interactions. Surprisingly, Brazil, the nation with the most interactions among those studied, was the only one with a more pronounced reduction in comparison to the others. This country received slightly more than 5 million fewer Instagram interactions and nearly 1 million fewer Twitter interactions. While their Brazilian neighbours declined, the Argentines rose to second place, with 47.4 million interactions on Instagram Stories, and almost reached an impressive 49 million in May.

Flamengo has surpassed the 4 million daily engagement threshold on Instagram for the second time. It ensured the club’s 10th place in front of Club América on these two days, and its monthly Instagram performance. Interactions on the 13th were captured in a video recorded behind the goal during Andreas Pereira’s spectacular free-kick against Juevntude. The win over rival Atlético-MG, the Championship leader, the other day was a fantastic effort. Flamengo’s chances of becoming the tri champion were maintained thanks to this stunning victory.

Unfortunately for Brazil, there was a drop of little more than 5 million Instagram engagements compared to September’s total of 163 million. The losses of Flamengo (-9 million) and Corinthians (-12 million) underline this performance. In October, though, there were some bright spots. Atlético-MG and Santos both gained 4 million. Not only that, but among other cities, São Paulo gained 2 million, International got 1.4 million, and Fortaleza gained 1.3 million, helping to offset the loss.

We returned to the stadium after 583 days away from the squad to watch a derby against their main rival, Boca Juniors, which they won 2-1. River Plate was the only team – aside from Flamengo! – to have more than 4 million interactions in a single day, which delighted the fans. In total, 4.05 million interactions were recorded, putting Corinthians (BRA) in second place by little more than 400 thousand interactions.

Another significant aspect was River Plate’s dominance on Facebook. They gained 3.3 million interactions compared to 3 million for Flamengo, the team that usually appears in first place. When we consider that Argentina had 5.88 million overall interactions on Facebook, with 3.3 million from River Plate and 656 thousand from Boca Juniors, the data reveals a concentration of concerning interactions and a need for other major football teams to increase content and engage with their audiences.

Learn more about Argentina’s most recent news, including their match against Italy as UEFA and Conmebol deepen their partnership.

Previously Facebook and Instagram had the same number of interactions relating to Liga MX teams. But Instagram has begun to stand out, and by October, it had narrowed the gap to just over 8 million: (17.55 million x 9.66 million).

While the monthly record in Brazil and Argentina was over 4 million interactions, Mexico’s monthly peak on October 3rd was 789 thousand interactions. This monthly high was achieved thanks to Club America’s 2-0 Liga MX victory over Pumas in the 12th round.

Brazilian teams make the most use of videos on their Instagram pages. There were 2050 clubs, compared to 1241 Mexican clubs and over 1000 Argentine clubs. Brazilian clubs received approximately 100 million views, 96.4 million to be exact. One thing to remember is that interactions do not include views. In comparison, the 1000 Argentine videos earned 33.37 million views, while the 1241 Mexican videos received only 7.63 million. This impressive result accounted for 50% of Club America’s submissions, which totaled 87 videos.

Colombian clubs were the only ones who did not rank among the top 20 on social media. With the exception of Atletico Nacional, which has won the 17th position on our rankings. The country has yet to regain its interaction rates prior to the devastating protests, and it is the sixth month in a row that the country has failed to surpass a million Twitter interactions.