World Cup: Argentina, France impress on the pitch and Instagram 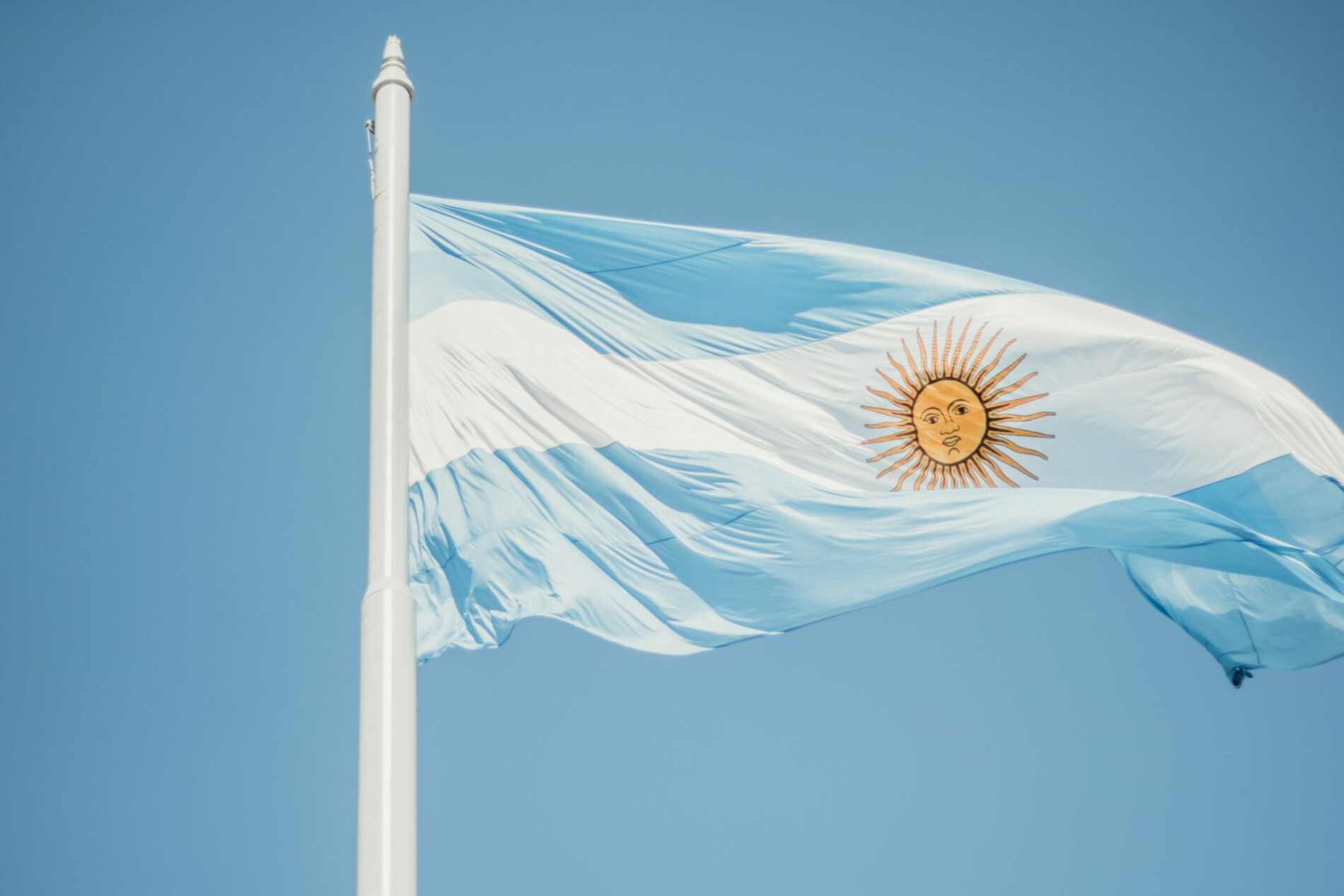 If we take into account the performances of the 30 posting national teams plus the official FIFA page, the total number of interactions approaches one billion.

The exciting battle between Argentina and France directed the attention of a large part of the world to National Stadium in Lusail, Qatar, for the final of the 22nd edition of the FIFA World Cup. Proof of this were 98.8 million interactions on Instagram this Sunday, the 18th, with the official pages of the Argentina and France national teams and the FIFA World Cup official account.

The highest number of interactions was achieved by FIFA’s official page. Overall, the organization totaled 64.6M interactions, a performance that represents about 15% of the total accumulated by the account between November 20th and December 18th, the period over which the 64 matches of the competition were played. 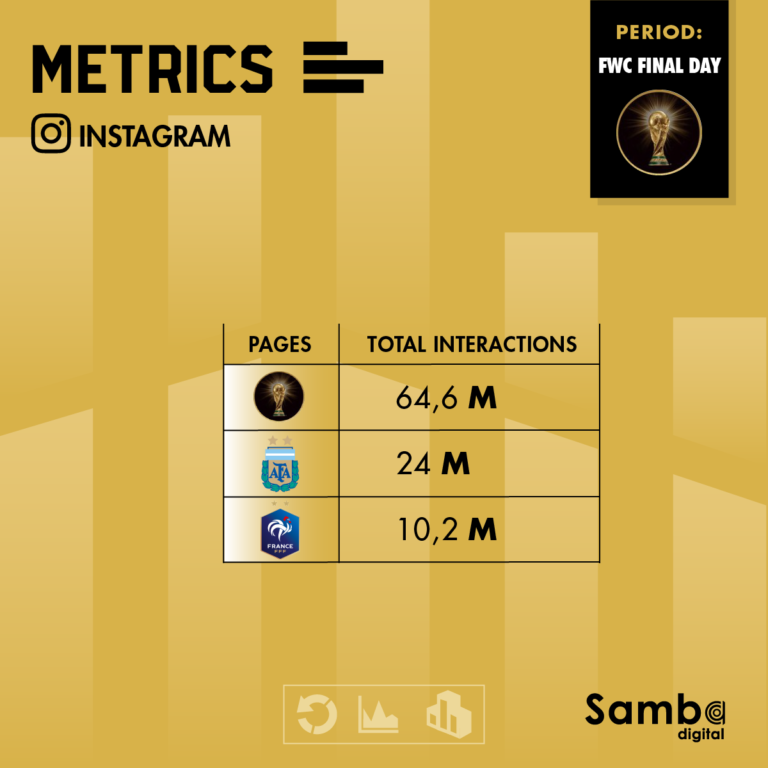 To get an idea of the magnitude of the numbers that Instagram reached throughout the FIFA World Cup Qatar 2022, if we add the performances of the 30 teams that posted on Instagram – Iran and Tunisia did not post even once – plus the official page of the competition (@fifaworldcup), we reached an incredible 914.2 million interactions in 28 days. This represents a daily average of 32.6 million interactions and a little more than half of what was achieved just yesterday by Messi & Mbappé and their teammates.

This performance was analyzed by Wagner Leitzke, Social Media Manager at Samba Digital.

“Today, when we talk about the World Cup, we are not limited to just the competition among the teams, but the whole media event that surrounds it, something that today can be compared perhaps only to the Super Bowl. FIFA has opened its eyes to digital world and we have already seen a different kind of coverage on its channels. This is a path of no return; more and more importance will be given to the digital field,” he said.

In a comparative scenario, while the official FIFA profile on Instagram reached 64.6 million interactions with 86 posts, the NBA accumulated 2.4 million, with seven games from franchises such as the Orlando Magic, Boston Celtics, New York Knicks, Golden State Warriors and Chicago Bulls. The NFL accumulated 5.9 million interactions on its official profile, with 11 games.

In order to obtain a fairer comparison, we extended the period of analysis and selected the last quarter of the year, starting the analysis on September 1st. Still, even with just 28 days of competition, the official FIFA page on Instagram has a massive advantage over other competitions and sports. 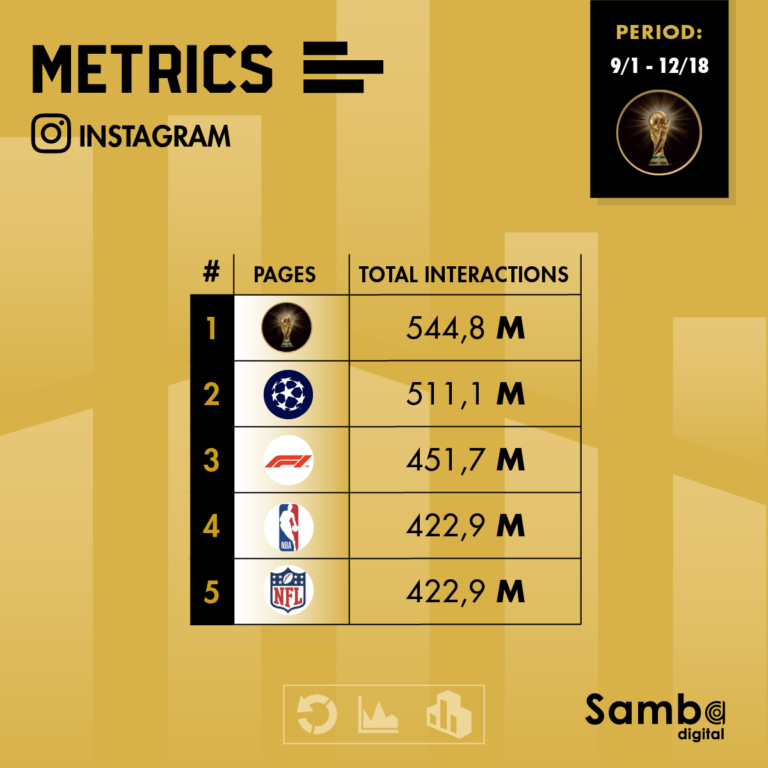 The role of football in society is further highlighted by Guilherme Neto, Digital Manager of Club de Regatas Vasco da Gama, who also mentions the relevance of Instagram in relation to other social networks and the content developed.

“There is no sporting event in the world that compares with the World Cup. Football continues to be the most popular and passionate sport on the planet. Regarding the data, there are two very important questions. The first is to note that Instagram proves its preeminent position as a favorite social media and, just as important, the excellent work of FIFA’s content team,” he said.

The Brazilian team led the ranking of interactions on Instagram during most of the competition, but Argentines and French took the lead in the final stretch.

Until the eve of the final, Argentina, with 62 million interactions, had been only third in the cumulative ranking of interactions, behind the French and Brazilians. Winning the World Cup for the third time brought Argentina 24 million new interactions and the top sport for the tournament as a whole. 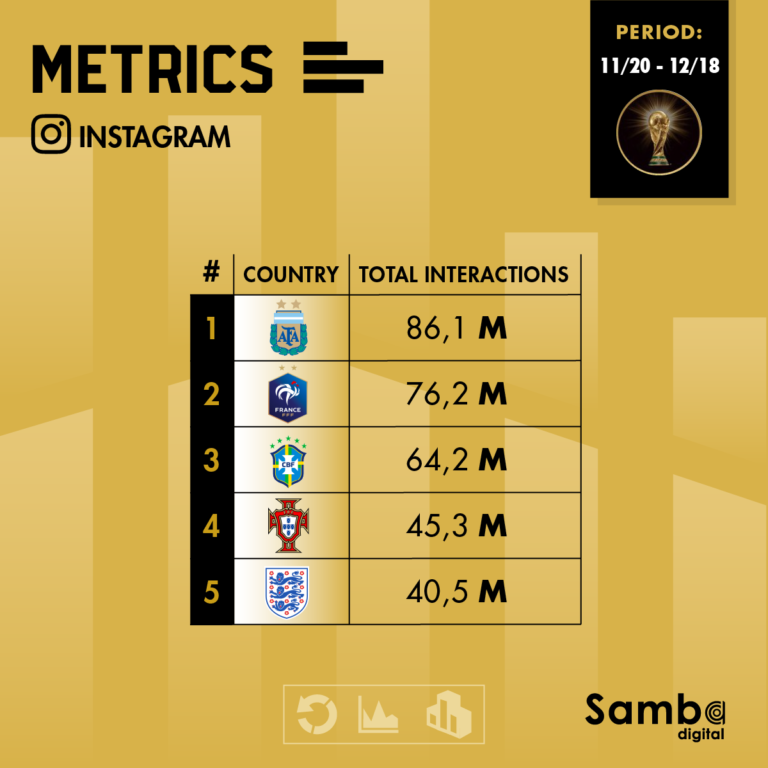 Brazil has the highest number of new followers

Despite being eliminated in the quarter-finals by Croatia, the Brazilian team official page gained the most new followers on Instagram at the end of the FIFA World Cup Qatar 2022. With 2.8 million new followers, Brazil lead as the national team with the highest number of followers. Overall, 15.8 million profiles now follow the official page managed by the Brazilian Football Confederation. Next comes Argentina, followed by Portugal, Morocco and France.

If we consider the biggest increases proportionally to the follower base before the start of the FIFA World Cup Qatar 2022, the biggest winner is South Korea. Their page almost doubled its follower base during the competition, in which the Koreans ended up eliminated in the round of 16 in a clash against Brazil.

It is also interesting to note the growth of Argentines, who increased their follower base by almost a third with their third World Cup title. The Argentine national team are now fourth in terms of number of followers, with only 2.1 million fewer than Portugal, who are third in the ranking. The Portuguese could notably lose a media asset like Cristiano Ronaldo, who has probably played in his last World Cup.