Home » Flamengo’s winning streak in the LATAM standings continues into the new year, despite a drop in total interactions 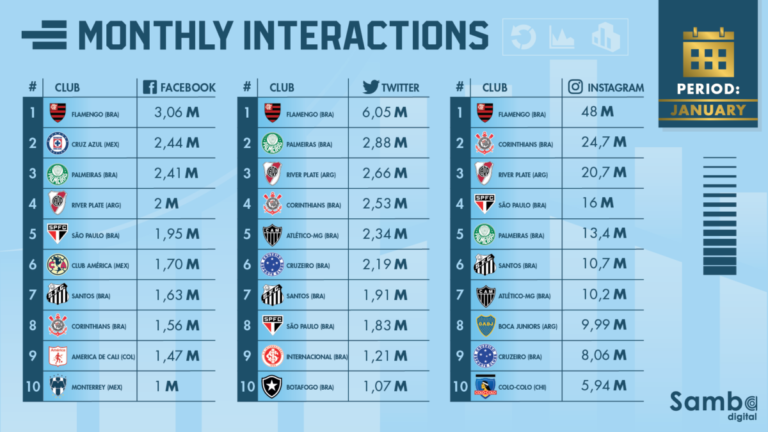 Flamengo’s winning streak in the LATAM standings continues into the new year, despite a drop in total interactions

Since last year, Samba Digital has been paying close attention to what LATAM football clubs are doing to stay in touch with their fans, supporters, and clients. One of the most enjoyable aspects of checking these numbers has been discovering traces of each country’s culture in the content uploaded.

Another key piece of information that this article will provide is where the local user is being influenced by this content. Is Mexico similar to Chile? Are Argentinians, who make up one-quarter of Mexico’s population, more devoted to football topics? Continue reading to discover our comments on what happened in LATAM in January.

The Brazilian Championship, which was still being played in the traditional month of vacation and the start of the season in January 2021, caught fire in its final third, with Flamengo fighting for the national title, which it would win. That month, the Rio de Janeiro club received 29 million interactions. This is not surprising given that there was a dizzying increase throughout the year, reaching 48 million total interactions.

The video of Michael’s goodbye showed a ceremony among the squad to award the title of “ugliest player” to right-back Rodinei, which really broke out with Flamengo’s fans.

With 2.5 million views, the stunt is the highlight of the month:

When compared to January of last year, the number of interactions in Brazil has decreased. While Instagram increased from 125 to 141 million users, Facebook decreased by more than half: from 30 to 14.1 million users, and it continues to lose continental reputation.

Twitter, on the other hand, showed a total increase of 10% over the previous year and reached 32.5 million interactions, with Brazil boosting Twitter’s performance.

The two clubs have already battled in the Copa Libertadores da América a few times, but this time the battle has been fought digitally, mainly on Instagram.

Click here to learn more about Samba’s LATAM rankings, which include a remarkable total of 366 billion interactions in 2021.

And the result of the highest Mexican % in the division is…

(…) the presence of three Mexican clubs among the 10+ on Facebook. Cruz Azul, Club América, and Monterrey were among the 10+ clubs on the list in January. Cruz Azul came in second, with slightly over 2.4 million interactions, accounting for over 20% of all interactions on the social network in Mexico.

As previously mentioned, Twitter maintains its performance as a result of the platform’s expanding relevance in Brazilian digital consumption. This is demonstrated by the fact that, of the 11 clubs with the highest number of interactions, ten are Brazilian, with River Plate, from Argentina, serving as the intruder.

The Argentine team almost jumped the line of the Copa Libertadores final on Twitter, since Flamengo and Palmeiras, the protagonists of the last decision, were the two clubs with the most interactions on the blue bird’s social network.

A record for a Chilean club

For the first time since the Monthly Ranking’s creation, a Chilean club is among the top ten. The feat was achieved with 5.94 million Colo-Colo interactions, thanks to the Copa Chile titles, against Everton, the Supercopa de Chile, over Universidad Católica, and the club’s appearance in the Summer Tournament, when the team competed against Universidad de Chile and Boca Juniors.

Despite some highs to kick off the new year, the number of interactions declined from 290 million in January 2021 to 289 million in January 2022. Unfortunately, the positives did not exceed the negatives this time, as the cause of the dip was that last year’s calendar saw fewer matches – primarily from the Brasileirão – due to the pandemic.