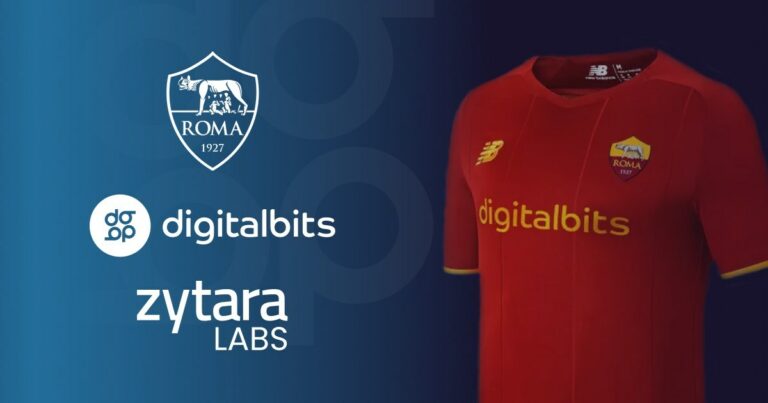 AS Roma has announced a shirt sponsorship deal with Zytara Labs, which had been rumored for a while. As part of this partnership, Zytara Labs has agreed to a three-year jersey sponsorship deal for €36 million. Starting in the 2021/2022 season, Qatar Airways will be replaced on the front of the Serie A club’s playing shirts by the DigitalBits blockchain network. The DigitalBits logo will also be stitched on Roma’s women’s and junior team shirts as part of this new arrangement to boost awareness. For the men’s team, there is home, away, and alternate shirts available.

Learn more about the world of NFTs, including how Juventus and Andy Murray built their own NFTs, by clicking here.

For DigitalBits, this is a noteworthy agreement because it marks the company’s first step into sports sponsorship. As a result of this newly formed relationship, DigitalBits has been able to reclaim its position as a fast and secure open-source blockchain that enables consumer digital assets.

This is significant for both Zytara Labs and AS Roma. When the DigitalBits blockchain is connected with the squad as a result of this partnership, the club will become the first professional soccer club to do so. These two organizations will collaborate on official AS Roma blockchain-based digital assets as part of their relationship. As a result, the club will now take digital collectibles as well as the XDB cryptocurrency as new payment methods.

AS Roma has reached a new milestone

This collaboration, like others, will produce digital player cards and NFTs depicting current and historical events in Roma history. AS Roma is sewing the first 11 kits with the well-known DigitalBits logo, which were available for purchase earlier this month, to stand out from the competitors and to commemorate this new cooperation.

More on well-known Italian football clubs, including the rebuilding of AC Milan for fans and sponsors.

This historic relationship with AS Roma is crucial for Zytara and DigitalBits, as well as the whole blockchain industry. AS Roma will be able to achieve more success as a result of this deal. As a result of this partnership, sports teams will use blockchain technology to communicate with their fans.

The number of shirt sponsorship partnerships has surged in recent months. AS Roma is now the latest major soccer team to strike a deal with a blockchain company. Chiliz, the owner of the Socios.com fan engagement network, has also joined in with a shirt sponsorship as they partner with two additional Italian clubs, Inter and Valencia. This collaboration also used the popularity of NFTs to promote their own fan tokens on their shirts. Not only that, but this is Roma’s newest partnership, as New Balance has taken over as the club’s technical partner from Nike.