Home » INTERVIEW: Pedro Caffa, Social Media Manager & Coordinator, tells us everything we need to know about his role at Samba Digital 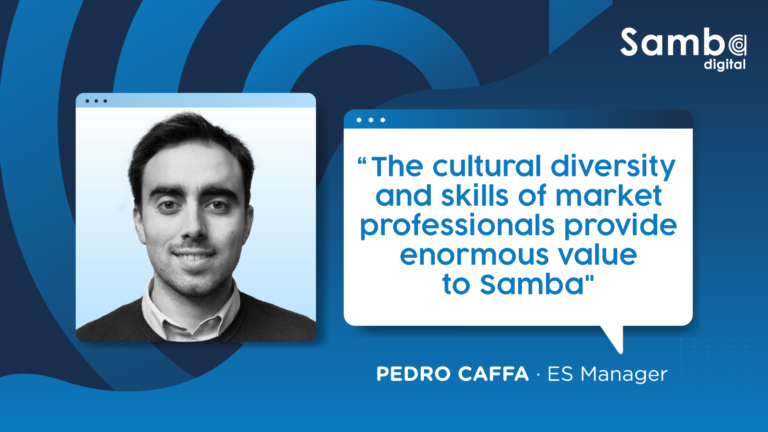 INTERVIEW: Pedro Caffa, Social Media Manager & Coordinator, tells us everything we need to know about his role at Samba Digital

With Samba’s recent success and big milestones, it was a great opportunity to discover more about the individuals behind the logo and their many clients. This is the first of a series of articles in which we will interview a member of the Samba Digital team and feature their unique perspectives. This series of articles will answer some of the most burning questions that are involved when dealing with large clients and their most compelling case studies.

What is your role at Samba?

I am the Social Media Manager and Coordinator for Latin America and Spain at Samba Digital. Within this key role, I am responsible for the strategy of clients (clubs, federations, and betting companies) in those territories. I am fortunate in that I have a fantastic team of experts that make work more enjoyable and manageable, including community managers, content creators, and PR managers.

As part of this fascinating work, we develop and implement online and offline strategies to bring clients from all over the world closer to Latin American fans in an organic approach that ensures solid engagement and growth.

What is your vision?

I joined Samba Digital 5 years ago in September 2016 and have witnessed the company’s rapid, steady, and tremendous growth, which has allowed me to work and reside in Argentina, Brazil, the United Kingdom, and Spain, where I am presently soaking up the sun. I have evolved professionally and personally in Samba as a result of my position, and I am glad to be a member of this team.

I, like the company’s vision, would like to see Samba Digital become a world leader in the development of strategies as well as the monetization of fan bases in the sector of sport and entertainment in the very near future. I believe Samba is a highly valuable, proactive, and full of hardworking professionals from all over the world who give that extra quality to be able to reach this aim.

What are your best case studies?

Fortunately, there have been a number of incredible success stories in the LatAm and Spain teams in the past, and there will be more in the future. The coverage in Paris for Leo Messi’s presentation at PSG is maybe the most resonant that comes to mind. The Samba team was fortunate enough to spend a week there with Tomás Marcó del Pont and Tomás De Micheli. This was a fantastic chance as the team, including myself, was able to put together a fantastic activation with prominent Spanish streamer Ibai Llanos. Thanks to this activation it was possible to have the very first Messi interview on Twitch in history.

Discover all about Samba’s work with PSG, including its activation with Ibai Llanos and Messi.

Of course, there are many more success stories to share, including a few from the difficult year of 2020. Fortunately, the pandemic had little effect on the Samba team’s excellent performance. For example, as soon as the global lockdown began, the team organized the First Virtual Club World Cup on Twitter in collaboration with the influencer Juez Central.

All of Samba Digital’s work with Juez Central to establish the First Virtual Club World Cup on Twitter can be found here.

This thrilling action involved all the clubs we work with at Samba in Spanish and other big LatAm and US teams.

This isn’t the end of the list of triumphs. The world of football mourned the death of Diego Armando Maradona in 2020, and Samba was up to the task of assisting Napoli in honoring the Argentine star with high-quality content in real-time. Samba had very good practices with Everton FC as well: When James Rodriguez’s appointment was revealed in September 2020, they devised an online and offline plan that featured blue lighting of Colombia’s tallest building.

This is not all, during the Toffees’ triumph over Liverpool in the Merseyside derby in February 2021, they planned the inaugural Watch Along exclusively for Latin Americans.

I emphasize the two-and-a-half years in London, where I worked closely with Tottenham Hotspur, a special club in my career. I have had several memorable moments with Spurs, including the team’s journey to the 2019 UEFA Champions League final and the opening of the new stadium.

How do you see the evolution of the market?

I believe we are in the midst of a historic moment, one in which the game is shifting. The way people consume sports is changing, as evidenced by the fact that today’s youth no longer watch football games solely on television. New platforms like Twitch provide a different perspective and storytelling for athletic events that appeal to younger generations. A prominent example of this is Ibai Llanos’ Copa América or Ligue 1 broadcasts this year in collaboration with Kosmos, Gerard Piqué’s company. Many artists and athletes now choose to communicate with streamers rather than journalists, signaling a shift in both the creation and consumption of content.

Social media first debuted as a “second screen” for sporting and cultural events a few years ago. Today, that second screen is not optional: it is required. Fans have progressed from being merely consumers of content to having the ability to create their own content as they see fit, and the opportunities available throughout the world are limitless. As a result, I believe that Samba, by using the fan as the axis of their marketing strategy, has a very significant asset in terms of being able to grow clients.

When it comes to the Latin American region, which is where Samba’s staff focuses most of its efforts, I believe there is still a lot to discover and do. True, it lacks the economic might of Asia or North America, but it does have two very important active assets: passion and creativity. As Latin American football players bring magic and dribbles to the European game, I feel that LatAm professionals, content creators, and fans can also contribute significantly to the digital game, which will be seen in the future years.

How do you bring added value to your clients?

My beliefs are apparent, particularly my opinion that the cultural diversity and skills of market professionals provide enormous value to Samba and, in my case, the LatAm team. They have highly skilled and innovative partners from Argentina, Mexico, Peru, Colombia, Chile, Spain, and El Salvador on the LatAm team. As a result, Samba can provide clients with a comprehensive and detailed view of a market as diverse as Latin America. Knowing the audience and knowing how to communicate with them, whether it’s a football club, a federation, or a betting organization, I believe there is no better added value than that.