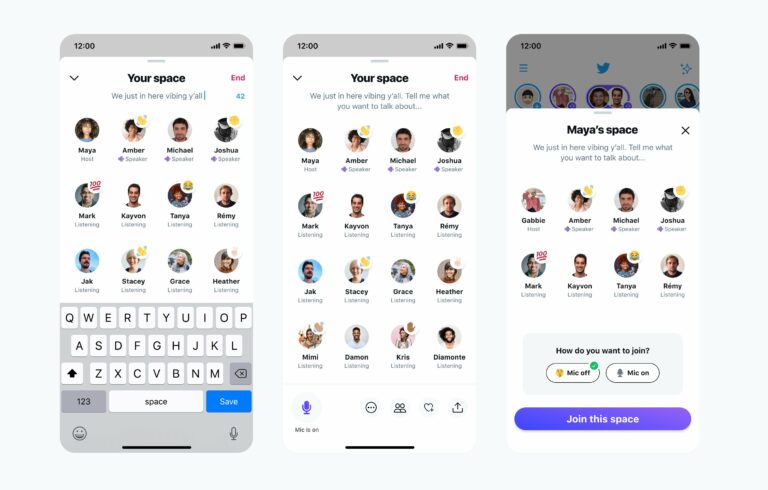 Will Twitter Spaces gradually replace Clubhouse and restrict its popularity? We will soon see as Twitter is hard at work developing Spaces, the new platform to join the trend of audio-focused social media platforms.

Twitter has demonstrated their commitment to making this new platform a force to be reckoned with by expanding Spaces’ scope to users and adding plenty of new features. The newest function is a scheduling concept that will give you more options when hosting and handling your audio. Users will be able to schedule any upcoming Spaces. And once scheduled, they will be able to alert their followers with a tweet. This tweet will provide a link to your upcoming event for those interested in attending; from this link, a reminder can be sent to those in your audience so they don’t miss out.

Not only that, but Twitter is now working on Space Discovery. Clubhouse, unfortunately for Twitter, has already beaten them to the punch with this concept. Clubhouse allows its members to switch between rooms at any time to find new discussions to explore. Twitter currently makes it difficult to locate live Spaces, although it is experimenting with new ways to overcome this barrier. In addition, Twitter is developing new Space title options to give users more power over their Space. All of these new features, like Spaces, are still in the testing process. But the ever-expanding audio-focused aspect will force Twitter to move swiftly in order to compete with new contenders like Clubhouse.

What else is new?

In terms of scope, Twitter defeated Clubhouse 1-0. Clubhouse users must develop an entirely new community from scratch, while Twitter users can use their current followers to build their audio-focused platform. Might Twitter’s mass audience be a double-edged sword? Will the quality of their rooms be a concern with such a large number of members in the Spaces and no limit on the number of members in a room? Unlike Clubhouse, which only allows exclusive users by invitation. This could impact the algorithm’s accuracy in matching users to rooms that are meaningful to them.

Twitter is not only developing their new Spaces app, but they are also expanding their original platform with new features. To compete with Facebook Groups, the Twitter team has built Communities. Users may join these communities and connect with other members based on a variety of factors, including hobbies and location. This new feature builds on their existing topics feature, making it easier for users to find discussions that are important to topics they care about. Twitter has also created Super Follows, which allows users to be super followers of their favourite accounts, to compete with Twitch and Patreon. Users can gain access to exclusive material, such as newsletters and super follower-only conversations, by using this super follower label.

We can clearly see Twitter’s commitment to dominating and maintaining user loyalty, as well as competing with Facebook and Clubhouse. While social networks like Clubhouse are still evolving, given Twitter’s pace of growth and benefits like audience outreach, they have the potential to become a significant player in the audio industry.